Previous
Home
Next
The Banking Landscape: Today and Beyond
by Jay Bachmayer | Posted in Finance

Banking Trends You Can’t Ignore in 2022.

Trends and relationships go hand in hand: some are steady and some fizzle out. In the banking world, things are no different – in fact, things are often quite steady. The headlines – more like a tabloid, will tell you different, “cryptocurrency is taking over the world!”

Is it really? Recent stats will tell you that 78 – 90 percent of the last three generations (Gen X through Z) haven’t bought into crypto in the past 12 months. So, honestly, it’s not taking over anything at the speed the headlines suggest.

Many of these headlines are created in the hopes of generating clicks but are any of them accurate? Epicosity Intelligence has broken down the current trends to give you an accurate depiction of the banking landscape as we know it.

In an article by Forbes, despite decades of growth and changes in the banking industry, one thing has remained constant: the need for customers to access their money quickly and conveniently – and to trust their banking institution. The COVID-19 pandemic accelerated the need for online-only or “faceless” transactions.

Despite this shift, however, nationwide surveys (see below) indicate that the dominate form of banking still falls on tradition: a physical location with in-person interaction. This comes to roughly 57 – 66 percent average.

Notice that the average number of people relying on credit unions surpasses those who are online-only by roughly 16 million – that comes between 19 and 26 percent.

Cryptocurrency. Is it a Good Investment?

What is Cryptocurrency? It’s a digital form of currency credited using encryption algorithms. Transactions are verified and records are maintained by a decentralized system using cryptography, rather than by a centralized authority.

Cryptocurrency and NFT’s are the buzzword and hot topic of the 2020’s. Speculation aside, how are they really shaking out in the marketplace?

Are consumers buying in? Despite what headlines – and what Matt Damon will tell you, research suggests that a majority of Americans have not purchased crypto in the past 12 months – only between 8 and 15 percent, in fact. Millennials and Gen Z show the highest level of interest, with the latter especially. 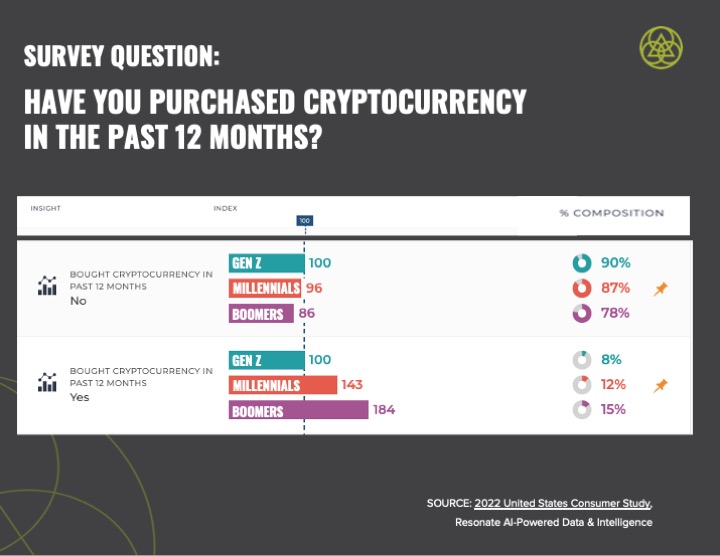 What about the next twelve months, will Americans buy it then? This is becoming more likely, but only upwards of 17 percent report that they will purchase for sure with an upwards of 76 percent saying they won’t. 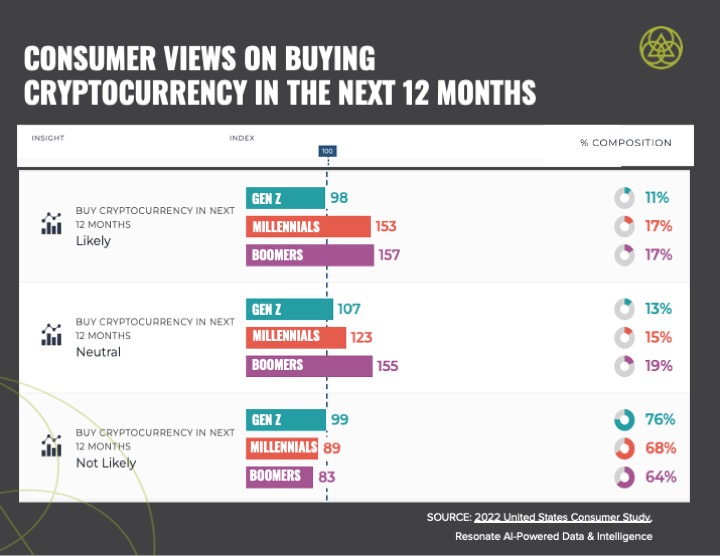 What's interesting is the below average number of people in Gen Z who say they’re “not likely” to buy in as opposed to the amount who said “most likely” in the last 12 months. When asked if they’ve considered it as a long-term plan to get them toward retirement, only upwards of 34 percent see this as a possibility.

With crypto being relatively new, U.S. officials say it’s tough to predict how it’ll be viewed in the long-term. One of continuous conversations involves the regulation of cryptocurrency. “Regulation is probably one of the biggest overhangs in the crypto industry globally,” says Jeffery Wang, head of the Americas at Amber Group, a Canada-based crypto finance firm.

According an article published in NextAdvisor, lawmakers in D.C., and around the globe, are discussing how to create laws and guidelines to make crypto safe for investors and detract cybercriminals.

Competition levels are at their highest, so which financial institutions are on top? Banks and CU’s are holding their own with up to 40 percent and as low as 31 percent share with Americans. But, the big FI’s have an undeniable presence. 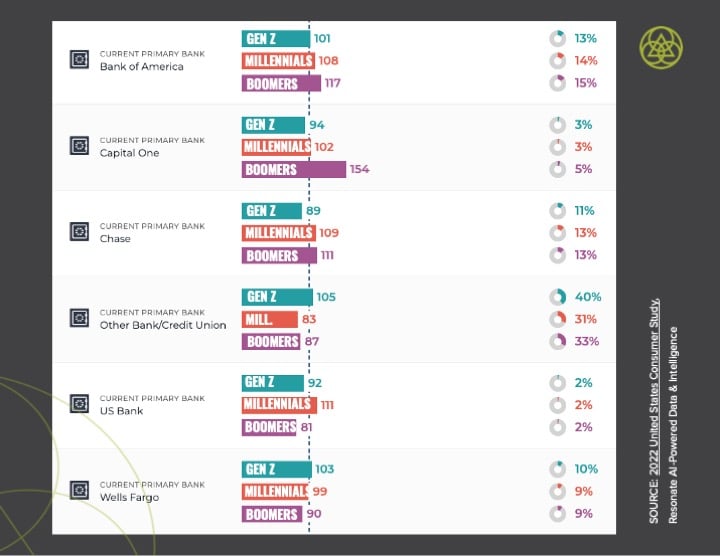 As for primary banking trends, there’s an upwards of 40 percent of Americans that utilize another bank/credit union. Gen Z shows more interest in using Capital One, yet only 5 percent have made it their primary bank.

Which Audiences Rely on Secondary Banking?

When it comes to secondary banks, the share is split far broader between the big FI’s, but what’s clear is that FI’s with strong credit card offerings and aggressive rates are established as secondary banks. 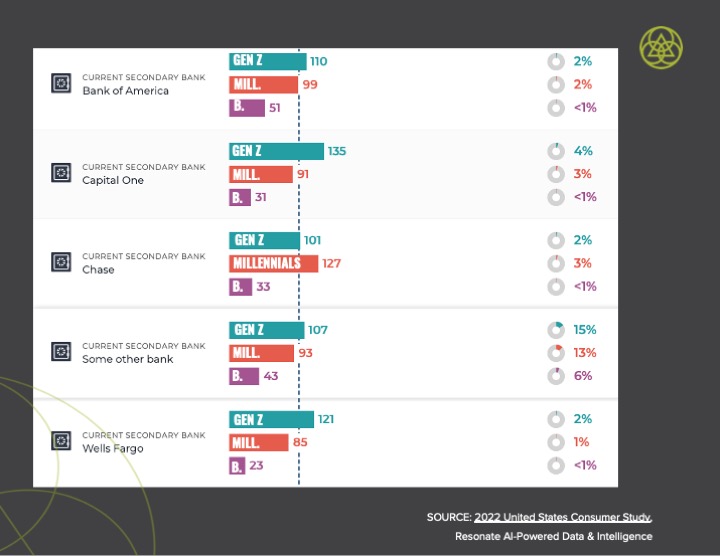 Gen X and Millennials are more likely to have a secondary bank than someone from Gen Z – actual users fall somewhere between 6 and less than one percent.

With the share split so broad between primary and secondary banks, we asked:

Primary Banks. What Do Audiences Want?

As the saying goes, “put your money where your mouth is,” and, in this case, we can see how Americans view the value of their primary bank.

Roughly 181.5 million utilize their prime bank for a checking account. 159.2 million Americans use it for ATM and debit card. 113.9 million use theirs for a savings or money market account.

Most primary banks find it difficult to compete on rates against specialty financial institutions. This makes communicating with your customers or members more important than ever. You want to be first in line and second to the table.

Secondary Banks. What Do Audiences Want?

We don’t believe this is necessarily what audiences are looking for in their secondary bank. Rather, the perception of financial specialization plays a heavy role in consumer confidence of getting a better deal or having a better system in place.

Most Americans (44.5 million) have a secondary bank for their credit card. Coming in just behind that, at 44 million, are Americans who utilize it for their checking account while 35.7 million use theirs for a savings or money market account.

Yet, there’s evidence pointing to consumers looking for better ways to pay beyond what banks offer.

According to an article found in The Financial Brand, much of those statistics lean heavier toward Generation X. “Credit card ownership is highest in older generations and has remained pretty stable there,” said Charlotte Principato, Financial Services Analyst at Morning Consultant.

She says enthusiasm for credit cards and debt are waning for millennials and Gen Z in favor of a “buy now, pay later” mentality. Now, that sounds like what credit cards already offer, yet this idea focuses less on buying impulsively but instead it’s gaining traction for assisting Millennials and Gen X in “making considered decisions when they choose to use buy now, pay later. People using BNPL are more likely to say that they are using it to smooth out finances,” said Principato.

Choosing a Bank or Credit Union. What are the Top Considerations?

A lot of what customers use their banks for plays into what they want out of the experience. Our studies shows that the biggest things consumers (111.8 million) look for in their bank is a free checking account. Coming in second, at 77.4 million people, are those who seek an online banking option followed by 62.3 who want their financial institution to have a good reputation. Around 3.3 million people care about a financial wellness program or loan availability (12.6 million).

Modern Banking Trends: What We Know.

The banking landscape has seen no disruption over the last couple decades that several tabloids would have you believe. Does this mean it will never change? Not exactly. It’s always changing – just at a very steady, slow pace. Pay attention to the (actual) trends and what customers are telling you, and you’ll know when a real shift is in play, then make your move.

Want more helpful content? Visit the Epic Vault where we specialize in loan, deposit and share of wallet strategies for financial institutions. Contact us today at (605) 275-3742.

Sign up to receive the latest in trends and tips in finance marketing!

Building an Effective Facebook Strategy for your Bank or Credit Union